The 2008 Festive Buyers Guide - Chapter One

To busy to read this chapter - {enclose http://www.coffeecrew.com/images/stories/podcasts/CoffeeBuyersGuideChapter1.mp3} 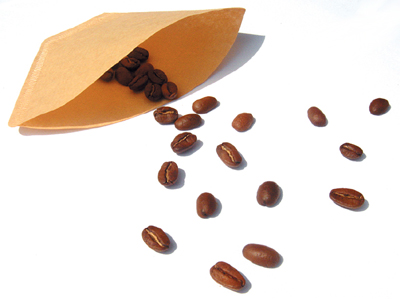 No year is complete without a guide to what's hot and what is not in the World of specialty coffee. This year is no different - Well, actually it is: The economy is in a free fall and we have not hit bottom yet. How will this effect the marketplace for the coffee lover? At this juncture and in time for Christmas, probably not much. That said, I am going to approach this annual feature as if there will be some retail phenomenon that you, the buyer, can take advantage of.

Additionally, I would like to stress the importance of approaching better coffee for the home and office thusly: Coffee and espresso is a journey, not a destination. I have probably repeated this mantra over and over... over the years - and it has never been more important than now - I mean, it does come down to dollars and sense for most people. So why not start at the beginning and go from there?

If I was sitting at your kitchen table right now - or office coffee lounge (go on, picture it...) I would have a table covered with some very basic stuff; a handful of coffee filters, a plastic #4 Melitta coffee filter holder, maybe a glass carafe, a thermos, a french press or bodum, a burr coffee grinder, some cups and saucers, an electric kettle and a supply of fresh water (out of the tap - NOT bottled!) These are tough times after all!

Oh yea. and beans. Wonderful beans. Freshly roasted from somewhere nearby. or mailorder. More on that later.

Under the table is a box and it contains some surprises. I warned you - you may be required to use your imagination here.

A year ago when I was working on the 2007 buyers guide, I reflected on the overall mood of the year to date - because that guides me as to what to concentrate on for the next issue. A year ago it was not uncommon for e-mail check-in's and queries to include the phrase "Money is no object" - "Want to buy the best for my (insert) Mate, spouse, boyfriend, girlfriend, mother, father, aunt, etc..." That was a year ago. A year or so ago I was in touch with a young lady from London, England who wanted to treat her boyfriend and future husband to "The best cafe served coffee in the World..." - obviously no expense spared.

And I could have sent her anywhere - anywhere interesting... or really expensive. Instead I said: "Come here to Victoria. We have some of the best coffee in the World..." So she came... with her parents and her BF's parents and her sister... all the way from England... to Victoria.

That was last year. This year I am standing in your imaginary space clutching a fistful of #4 coffee filters. Ho ho ho.
What a difference a year makes! No really. Stay with me on this! I am going to make a point... eventually.

A year ago people were buying everything the market had to offer - without, I think, researching it much - without looking at this site much or any of the other consumer oriented influencing websites - like Geek and Home-Barista. And as much as it is easier to just say to people with bags of money: "Yea, the BFG-5000 super-duper-matic espresso maker at a paltry 3000 smackers is perfect for everyone..." - And then, I wouldn't really be doing my job now would I? If you read our forums (and you should) you will know that money does not always buy happiness where hasty purchase decisions are made in Coffee World. In fact, if you read some of my reviews of some of the stuff that is out there - it is pretty obvious that I am not a big fan of the big hunks o' plastic super duper machines - because they can and will break your heart and your bank... More on that subject later.

What I am a big fan of (especially now...) is simplicity and fiscal responsibility (and at the same time, doing something that would benefit the millions of wonderful folks that actually work on the coffee farms.) Trust me on this - the World would be a much better place if you invested some dough in a 3rd World coffee farm instead of a worthless coffee machine cluttering your kitchen counter and wracking you with frustration... Yea. I guess that is a nag, huh? Anyway - waving coffee filters again.

Here is my supposition for 2008. I have a feeling that if you keep it simple this year, you will be feeling way better next year. So. How can we do that and still come off sassy on Christmas morning? Well, to help make that happen, let's go way back to the beginning... my beginning in the World of coffee exploration - and how, in part, it has brought me to this place and time.

I first sipped coffee in the Spring of 1975 (sorry, no age but suffice to say that I would actively discourage anyone from picking up the coffee habit at this early age. ) 19 is a good age to try coffee - and I sure as heck was not 19 in the year 1975. Anyway, (I was) so captivated by this awesome beverage so long ago that my brother-in-law thought it would be cool to give me a coffee themed gift for Christmas 1975. (One more hint... My brother-in-law was about 10 years older than me.) His choice of coffee themed gift was several bags of ground coffee from Murchies of Vancouver - they had outlets in Victoria and were one of the original inspirations for the folks that created Starbucks. It should be noted that at this juncture of my coffee drinking career (literally less than 6 months...) I was drinking the cheapest coffee my mom would find - typically $2.99 to $3.99 for a 8 to 10 ounce bag. Think Chase & Sanborn, Folgers, Nescafe, etc.

So. Getting 2 pounds of real Arabica coffee for Christmas in 1975 was a really big deal. Ironically, he picked some pretty intense coffee for my taste buds; Dark French and French Roast if memory serves me correctly. Brewing that stuff for the first time (some of it in an aluminum percolator and some of it in an actual Melitta Glass paper filter holder) was completely mind blowing. I had never tasted the real thing before and yet at that young age (just barely a teenager) I clued in that this stuff was the real deal. Good bye tea! At the same time, these were financially tough times for my Mom and family. Getting food on the table (and the occasional cup of coffee) was challenging.

And guess what? For some, 2008 and perhaps 2009 is going to be tough for lots of people. I hope everyone can keep enjoying their coffee experiences - I know for a fact people are not going to be getting those to-go lattes and cappuccinos out as often as they used to... so that brings us to the overall message of the 2008 Buyers Guide. It is going to be simple and it is going to be cheap - and you are going to learn a whole heck of a lot about great coffee - and feel good about it at the same time.

In late November of 2008, my kitchen counter is a pretty basic one - I am testing a Pod machine (the La Piccola Sara) for a detailed review hopefully out before Christmas - and 100% of my coffee prep is dead simple. #4 paper filter (holding them in my hand, remember?) And I have a plastic Melitta #4 filter holder - retail value about $5 from Sweetmarias.com. The paper filters are about $3 for packages of 100 (bleached or unbleached). The very heart of this simple operation is a Bodum Antigua burr grinder from BodumUSA.Com - about $129. At the core, it is a Baratza Maestro with a different shell - it is more than adequate and grinds coffee all-mode - Espresso through French... very important.

And the beans. The single most difficult challange you may face in getting your caffeine buzz is getting the beans right. Unless you are lucky enough to live near a roaster, you may have to depend on some mailorder beans - and in North America there are lots of great choices... Like Batdorf & Bronson (now Dancing Goat), Ravens Brew, Peets, and the like.

So. Gift package number one: A basket of beans, a filter holder, some filters, a coffee grinder and a neat mug. Total cost - Less than $150. Now that is sound fiscal management!

Take a deep breath and move on to Chapter two!